In overwhelming self-esteem, Rockwell evidently agreed with the verdict of the immaculately dishevelled, widely smiling, cap-toothed examples of American dentistry who are the authors of Norman Rockwell’s America, the book-cum-catalogue of the current exhibition of his work at the Dulwich Picture Gallery. They have it that he was and is “America’s pre-eminent artist-illustrator, perhaps our greatest storyteller, and the world’s most beloved illustrator”. That is one hell of a triple claim. There may well be some truth in the first part, substantiated by his 322 covers for the Post between 1916 and 1963 (almost half a century of a style and vision that underwent no fundamental change) in decades when magazines had far greater penetration and circulation than now. At the storyteller claim, however, I am inclined to toss the names of Fenimore Cooper and his Natty Bumppo, Poe, Stowe, Hawthorne and Twain, who told so many of my childhood stories and Henry James, Edith Wharton and the innumerable hacks of detective and pulp fiction who followed them, for no painted picture tells a story better than a scribbler’s prose. As for Rockwell’s being best beloved of the whole world — this is arrogant piffle, ignorant balderdash, flapdoodle, hokum, bunkum and horsefeathers.

On what purports to be a serious catalogue, the authors impose a repellent Reader’s Digest style and a text of pure puerility, to which the cynic must respond that this is precisely the aesthetic and intellectual level of exegesis that Rockwell merits and that anything more perceptive would be a mismatch with the homespun, cracker-barrel, neighbourly folk to whom his work was pitched.

The hokum and horsefeathers are, alas, infectious: here and there in this wretched text are signed interpolations by the eximious director of the Dulwich Picture Gallery himself, snippets of schoolboy art history declaring, for example, that in The Runaway and Young Valetudinarian, he perceives something of European Old Mastery, Rockwell sharing the aims that Rembrandt pursued with such authority in the last years of his life. Not content with diminishing Rembrandt in this comparison, he does the same for Dou and Van Dyck, tempting ridicule and derision by reproducing their paintings on the same page as, in these two cases, Rockwell’s absent canvases — 25 included in the catalogue are not hanging on the walls.

Elsewhere, in a “Statement” (how pretentious), the director gushes his enthusiasm for Rockwell. Citing his Rockwell “epiphany” at an exhibition in America, he affirms the painter’s greatness, his special skills, his truths greater than reality, his marvellous realism, his visual jokes and whimsical insights, hauls in a comparison with Ostade, hints at a connection with Vermeer, and asks who among us would not want to live in America as Rockwell saw it? He even demands that those of us who do not share this fatuous view should “lighten up” — to which my command of the American vernacular provides no polite printable retort. I observe, in passing, that Vermeer painted a brothel scene and that Ostade was much given to images of peasants drunk, vomiting, emptying their bladders and putting their hands up skirts; we find none of this in Rockwell’s work, in which even the dogs are decorous, never emptying their bowels as 17th-century Dutch dogs so often did in churches.

- Evening Standard, 16 December 2010
Posted by Slightly Intrepid No comments: Links to this post

'There are three states of legality in Irish law. There's all this stuff here, which comes under "That's grand!"; then it moves into "Ah now, don't push it"; and finally into "Right, you're taking the piss"'

- Dara O'Briain, Live at the Theatre Royal, 2006
Posted by Slightly Intrepid No comments: Links to this post

'A watermelon!" I shouted at the Archbishop of Canterbury. "She said that she carried a watermelon!"

Yes, it was a standard Wednesday night out for me: explaining the plot of Dirty Dancing to the leader of the Church of England.

I think Dr Williams has seen the film anyway. But it's hard to be sure. I didn't really let him get a word in.

Having been invited to a reception at Lambeth Palace (in error, I assumed, as I hurriedly accepted before the mistake could be rectified), I had been taken aback to see the archbishop actually standing in the doorway. The Archbishop of Canterbury. My jaw dropped. I clasped his hand. I gabbled something incomprehensible. I am a fan of his and I did the fan thing.

"Well done," muttered my friend Charlie as we finally moved through the doorway and into the reception. "If Lou Reed is standing in this room, I don't think I'll be able to embarrass myself as much as you just did."

Sympathetic, perhaps, to my star-struck awkwardness, the kindly Dr Williams came to talk to us again. It was an opportunity for me to be a little cooler. Say something witty, perhaps. Or wait for His Grace to speak. Or Charlie.

Instead, I apologised for my random opening remarks by way of a rambling soliloquy about the moment in Dirty Dancing when Jennifer Grey sees Patrick Swayze in a nightclub and fancies him so much that she can say nothing more sensible than: "I carried a watermelon."

Oh yes. In this scenario (I realised too late to stop talking), I was Jennifer Grey. And the Archbishop of Canterbury was Patrick Swayze. The grinding, bare-chested target of Jennifer's summer lust. I have racked my brains, in the nights since then, over whether I could have come up with a less appropriate analogy. After some reflection: no. On the plus side, I have worked out that my pillowcase might make a very effective noose.

The BBC's Mark Kermode and Simon Mayo surveyed their listeners for the basic rules of decent and courteous behaviour in cinemas. Here, then, is the bottom line. Read and obey, bag rustlers, phone-checkers and mutterers! (You bastards!) 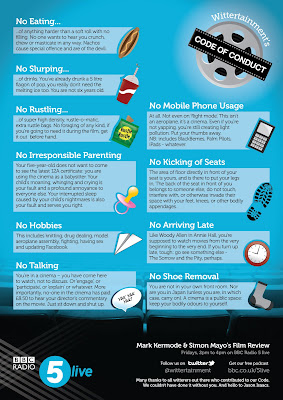 Early contenders for the Darwin Awards

From a discussion of religious turmoil in North African Christendom in the 5th century:

Donatists were fanatical revolutionary martyr-terrorists, attacking landlords and money-lenders and sometimes forcing rich men to run behind their carriages while their slaves rode. And since they believed that martyrs went straight to heaven, they would reportedly challenge passers-by to kill them or would throw themselves en masse off cliffs.

One of the most influential Christians to come out of Africa during this time - or rather to stay in Africa, because he lived in the Libyan city of Hippo Regius - was the bishop of Hippo. St Augustine, as he is known by millions of Christians, was the anti-Donatist rhetorical hit-man. By logic and authority he demonstrated that suicide was not martyrdom but a sin. (It must have been very disheartening for any Donatist, having persuaded a passing fish-paste salesman to kill him, to find that instead of entering heaven he had just bought a ticket to hell).

Mentioned by comedian Dara O'Briain in his recent stand-up DVD 'This Is The Show', this clip of two rough types having a free and frank exchange of views in a street in Athlone is noteworthy for its wide-ranging inventive use of language - virtually all of which is not in the slightest bit safe for work.

Toy manufacturer Hasbro has released a Transformers toy with a remarkably inappropriate name... so now you can queue up this Christmas to buy your child the new Spastic Transformer. Seriously.

[Via The Now Show]
Posted by Slightly Intrepid No comments: Links to this post

"You're the first girl he's ever thought about the Führer with"

'The future with', not the Führer! Just one of the many mishaps generated by the iPhone's seemingly Tourette's-suffering autocorrect function. For many, many more, see:

[Courtesy of Louise]
Posted by Slightly Intrepid No comments: Links to this post